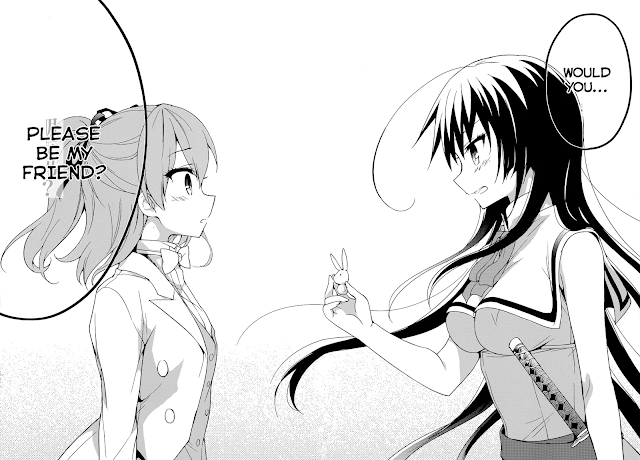 >>28787
>>28818
As far as I can tell, the story goes quite well for ten volumes of the novel and almost 15 of the manga - up until the end of the summer vacation. But then first the novel gets offed and the author has just one volume to wrap it up - novelfags seem to think he had 2-3 volumes in store, which he cut down to just one. And then... when the manga catches up to the end of the summer vacation, it gets even less: just one chapter.

Honestly, I'm not even mad. Most of the storylines are progressed to near completion, and the remaining mysteries aren't much of a mystery at all. I'd've loved a definitive "this is who he spends his whole life with" end, but it's a light-hearted comedy harem, so w/e. And, vice versa, it wasn't even that much of a harem: the author spent quite a lot of time getting the girls to love Aika. Notice, AIKA. Not the MC. So an Aika end is not undeserved. In that sense, a full-fledged end is, on one hand, hard to write, and, on the other, acts more as an afterword than anything. There ARE some plotlines that deserved more time and deeper exploration, tho, so I'd never say it's good that the manga got axed there. Main example is the relationship btw Reiko and Aika: Reiko was trying to win the affection of Aika without much success. That deserved a whole arc, like with Karen and Aika. I really loved that arc... and it really set up things for an eventual Reiko and Aika arc, which sadly never happened. And the other example is with the childhood friend. In many ways, she's the true Last Boss, not the really high spec imouto. Seems like the novel didn't even try to wrap that up, unfortunately, it only had time to do the bare minimum for Reiko + Aika.
That being said, the bonus chapter with Kimito marrying the head maid of Hakua? 10/10, I'm actually okay with this being the actual canon. Even tho I've been an Aikafag from the very start.

P.S. This manga has the most high-spec imouto that has ever existed. This is an undisputable fact.
- maid
- ojousama
- kuudere
- knows CQC
- is good at everything
- knows when to piledriver her brother
- keeps an exact count of all the times she's kissed her brother in his sleep
- convinces everybody that her brother is gay so that she keeps him to herself
- bonds that you choose are stronger than bonds that you're born with (tl;dr: go watch Manbiki Kazoku)

P.P.S. I may or may have not spent several hours just listening to Shuzo because of this manga.
…
It really was an educational experience, reading Shomin Sample.
Posted by erejnion at 05:13