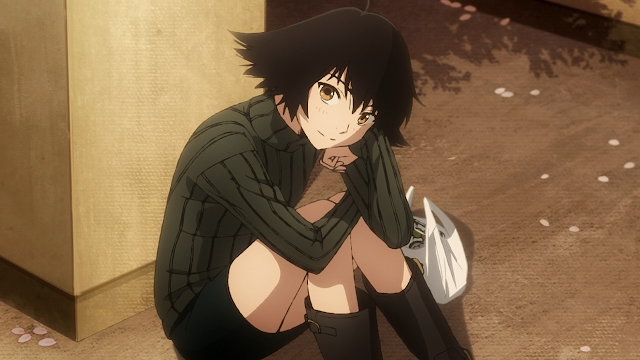 This is interesting. Best Girl is obviously Best Girl. And just by existing in the same place as HanaKana, she truly highlights all of the problems with HanaKana and why she's worst girl. In just two episodes this compare and contrast was quite enough to give us a nice understanding of HanaKana - and of Best Girl. But, also, the MC is pretty well-adjusted too, isn't he? He obviously stalled on hitting on HanaKana cause he knew there's something wrong. He can (more or less) do what he wants to do. He is more passive in nature, but he knows and accounts for that? He knows he'll be slow to change either way.
What I am saying… isn't pairing him up with Best Girl a waste? Wouldn't it be much more interesting to pair them with the two other characters instead?
See, Best Girl and MC are both… more passive with their own lives. They lack a solid base in terms of what they want to earn money with. They know their inner worlds but are more passive with dealing with the outer world. The other two in comparison are more solid in dealing with the outer world, while a mess with their own feelings - obsessing and avoiding in a manner that reminds me of Nadeko. Doesn't this make them pairing up like that a more boring outcome that will not allow them to learn and to compensate for each other's shortcomings? Going for what is there in the start… no, way before the start, even… instead of a braver grownup x grownup and teen x teen end, or a homo and homo end.
And, most importantly, why am I writing paragraphs of consideration how should a manga end when it has already ended years ago and I can just read it? How did this adaptation even happen if the original run was from 1997 to 2015?

P.S. Jashinchan is great. By the way, Jashinchan is the canon spelling. You don't say Jashin-san, you say Jashinchan-san.
P.P.S. Best Girl is a miracle of the universe.
Posted by erejnion at 00:02 No comments:

Shachou?
Posted by erejnion at 02:03 No comments: