Re: the ANIMATION in the last battle

For both of the competants this was their dream fight: a fight where their opponent is somebody who embodies in their eyes the ideal of a knight. A fight where they can at the same time prove their nobility as knights, and receive the peak of their happiness as knights. A fight where they are both on the same wavelength, and thus a fight that is the most fair possible. That's one half of the basis for why the animation was how it was. The other half was their focus. Because both use techniques that rely on short bursts and utmost focus, they both threw every drop of focus and energy they had in themselves in just one swing. All of this was coupled with animation that differed the two characters mostly by one color: red for Ikki, yellow for Touka. Every other color they have is gradually left behind (literally shown as the color withdrawing) in the process of their build-ups for their swings. Because they lose sight of everything else in the world, including even colors. Because they focus only on that one swing they must do in order to fulfill their ambitions and happiness. And all of this is the same for both of them. All of the context and feelings thrown in the fight, represented in an easily understood and gorgeous way by the animation. This is what animation is for.
Posted by erejnion at 02:24 No comments:

Email ThisBlogThis!Share to TwitterShare to FacebookShare to Pinterest
Labels: Rakudai

Re: the last battle in Rakudai 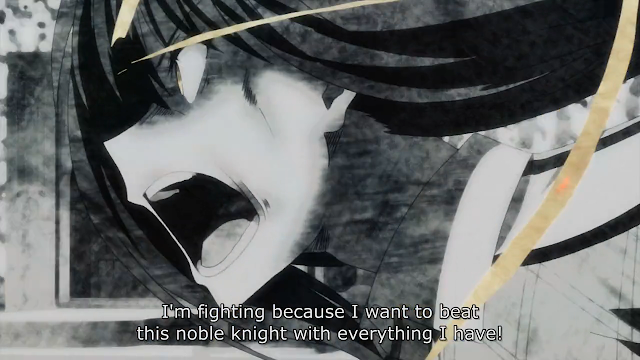 A lot of what Rakudai as an anime did was concentrated around that ideal of a knight, comparable to stuff found in A Requiem for Homo Sapiens, and the last battle contains the two characters that embody this the most. In that way it's not just that Ikki is fighting... he's getting exactly the fight he wants. It's a vindication for him to do this fight, the same as for his opponent. Both are throwing everything they are in that one swing, reinforced in probably the best possible way by the animation. Both are exactly at the same wavelength, so it's the fairest possible showdown, exactly the way both of them want it. For both of them the very participation in this showdown is at the same time a proof of their knight-like nobility, and a peak of their happiness with it. Which serves as a contrast with all the previous fights in this anime, and serves to round off the main idea in a really fucking beautiful way.
But that's not all. As Ikki says, he can't just collapse. There's more to it. Besides the ideals embodied in the anime, there's Ikki's interpersonal relationships too.
And that's why we aren't shown the final strike itself. That's why he can't collapse. We need to keep the tension until that other part of the anime gets its vindication and climatic moment too.
The marriage proposal.
It's a really fucking rare thing for an anime to manage to get its action hero to do his dream fight AND to get the main couple to engage by the end of the first season. And yet the story to be not even close to over.
I want a second season.
Posted by erejnion at 01:52 No comments:

Email ThisBlogThis!Share to TwitterShare to FacebookShare to Pinterest
Labels: Rakudai

Kani will get drunk on her 20th birthday and jump on Hashima, complaining how she never seems to be good enough for him, then after the obvious answer from him she'll get angry that he has no right to say who is good enough for her and who isn't, storming out, with Hashima following her. Myaa will have anticipated Kani and Hashima getting together in some way, trying to get drunk herself all evening, as her tolerance seems to be quite high. She may or may not jump on Haruto; he may as well get together with his sister for reals, just so that the author trolls us. Chihiro's secret will get revealed one day, but the reaction may as well be way more normal than everybody in the cast expects.
Posted by erejnion at 13:55 No comments: