Of imagination and family

Considering their reluctance to put in a major plot, and the short format of the whole production... 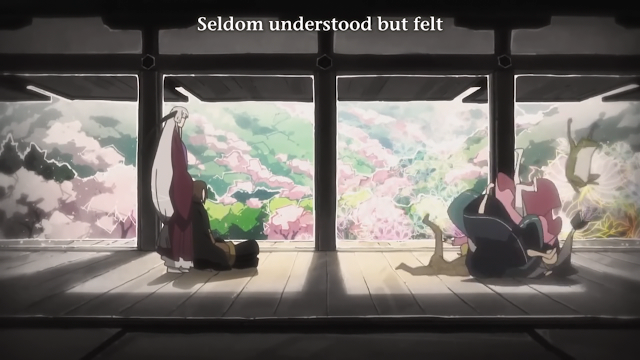 ...Kyousogiga's end was fucking perfect.
Posted by erejnion at 01:37 No comments:

Of spells and lossless compression 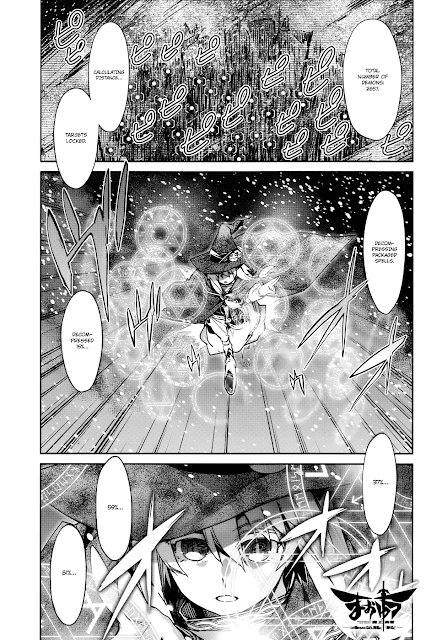 Every magical system that has in some effect compressed spells has no other option but to be awesome as hell.

AWESOME AS HELL.
Posted by erejnion at 23:39 No comments:

Of the end of Chuunibyou

That they learn there is a way to enjoy life and still live one at the same time. So what if the rocks aren't magical stones? Appreciate them for their beauty. Wonder and marvel at how they took thousands of years to get that shape, to be created. So what if the stars in the sky aren't gateways to another dimension? They are actually huge giant balls of fire that have been around for millions of years and we are still not sure how everything about them works. Are you telling me that's not magical and wonderful in it's own way? What kind of a boring person are you that you think the only wonderful things can come from purely made up scenarios?

The world is mysterious and wonderful as it is. It is not solely divided between those who use their imagination and soulless drone slaves to society. You just need to look harder.

...
I may write a coherent post about Chuunibyou later on, but I had to save this somewhere. Posters like him are why I keep going back to /a/...
Posted by erejnion at 04:03 No comments: 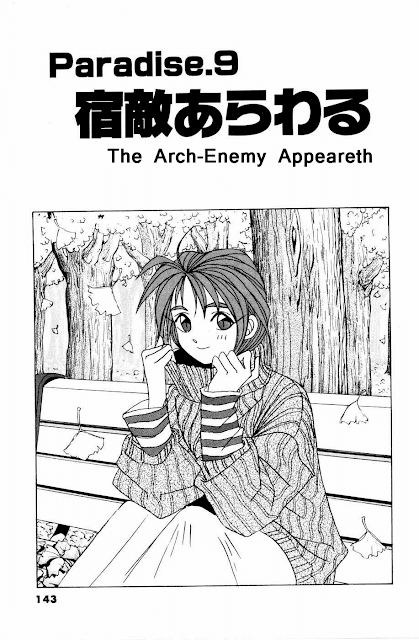 This kind of faces 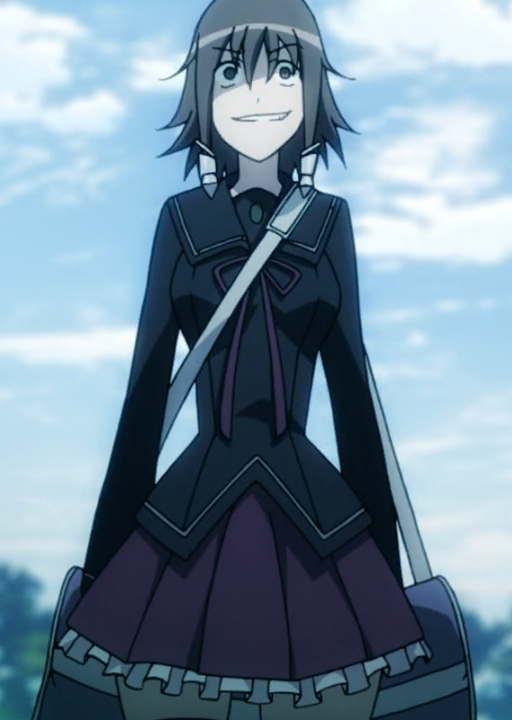 Anyway, I kind of didn't expect this story to be THAT straightforward, but I enjoy it nontheless. Looking forward to 12 and 13, I am sure they won't disappoint me.
Posted by erejnion at 23:50 No comments:

It went too far. Around half an episode too far. Yeah, I know. It's simply a cinematographic technique to raise the tension... but, up to now Chuu2 managed to use everything in its favour. Up to now. Why next-to-last episodes are always shit? Can't they just tell the story right? Why would you want to leave a whole fucking episode as a build-up for the season finale? You know, fuck this shit. Chuunibyou just lost its place in my Hall of Glo... I mean, in my list of favourite anime series.

At least I hope we'll see Mori snapping too. Not only Yuuta. It would be kind of sad if Mori has to snap so that Yuuta stops dwindling around, but I would love to see her action. I mean, as opposed to Yuuta's inaction.

In unrelated news, I love what KyoAni is doing with the colors. And the animation. And everything. Well, the sixth ep scene with the passing train still takes the crown. For the whole year.

P.S. And I still consider this a romance, to boot, the best one lately.
P.P.S. 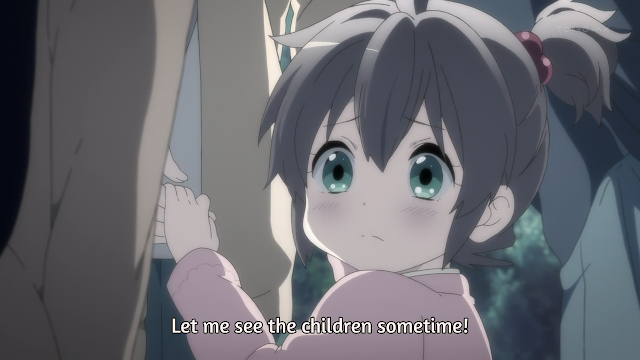 That being said, I do occasionally make such statements, without remembering them afterwards, but goddamn, that's one fine imouto.

Next episode: we finally see his ex.
Posted by erejnion at 17:47 No comments:

Do you know about Old Man Henderson? 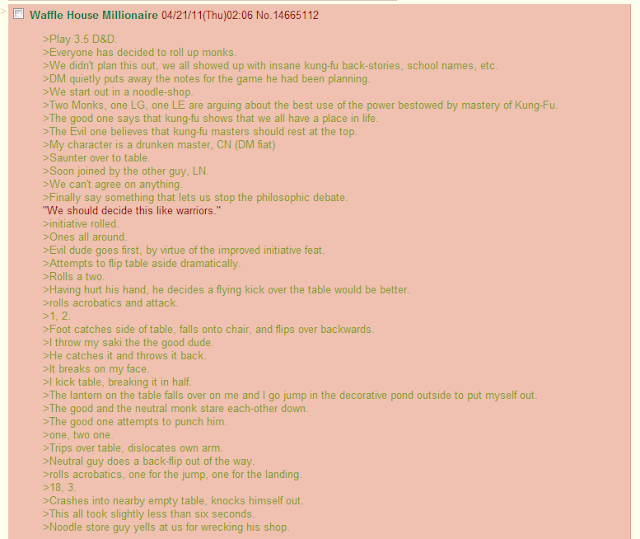 I just had to share.
Posted by erejnion at 18:56 No comments:

Email ThisBlogThis!Share to TwitterShare to FacebookShare to Pinterest
Labels: fantasy

Ахчо0о told me to say

that his favourite anime of the season is Zetsuen no Tempest.

And I am afraid to ask him if he is enjoying it ironically or not.
Posted by erejnion at 23:43 No comments:

Of Names And Witches

No, this is not about "A Nameless Witch". Geeze, that book was one great piece of literature, I should reread it...

This is about my belief that the names of the witches in Madoka Magica were not simply meta information, but were available in-universe too. Why would they be written in such an alphabet otherwise? (yes, that's Shaft, and yes, that's Gen) But I still like to think that Kyubei for example could have known them. (read the serialized mangas finally, maybe there...) Okay, okay. But, assuming that the manga series tackle this question in exactly the same way as the anime... there were a lot puella magi. At least one of them could have taken upon herself to decipher that which took us only two episodes, right? (...so?) So, this is about names.

Names carry power, that's a common belief within the set of magical systems. Ursula Le Guin would be an author I would show as a prime example, but, as always, this comes from down below, from the myths and legends of the different nations. Would not even try to say anything about this, it simply is outside my sphere of mastery. Names are special; and if you know the name of the wind, you can bend it; you can ride it... knowing the names is what gives you power to control. But that's only one of the sides of the same coin. Truly, the other is less prominent nowadays. (Why?) Magic is no longer a story of fear to thrill your kids around the fireplace, it's a tale of adventure about a world where the larger scale and the smaller scale are less contradictory. But it's exactly that other side I believe to be the case in Madoka Magica. That is to say, if we assume that names do carry power, the evolutionary correct variant would be the witches gaining power over the one who utters their name. Paraphrased, those girls stupid enough to learn the names of the witches just died off.

...I would love to see a story about such a girl. Or maybe there already is such a story? Oh well, one day I will feel like finally reading the spinoff series. For now, I am continuing with "The Name of the Wind", having dumped a little side thought on the piece of pa... blog already.
Posted by erejnion at 15:58 No comments:

Of Dreams And Such, pt1

Quantum Mechanics is a field in mathematics, created to explain particle physics.

My dream: to create a field in mathematics in order to explain a magical system.
Posted by erejnion at 20:49 1 comment: 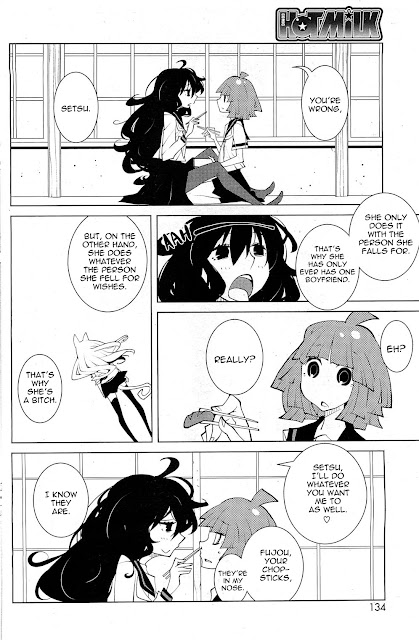 Goddamnit, Dowman, stop making me feel all these feels. Really.

I mean, what the hell? I feel giddy, smiley, happy and sad. That's love, not admiration. Yeah, I am an established fan, that is to say, I know how to enjoy whatever is thrown in front of me, but... the most the good authors ever reach is to make me admire how well is their oeuvre created. This is something else entirely.
Posted by erejnion at 00:47 No comments:

So... everybody in this anime is an asshole, except for the main girl.

And, if the main girl was an asshole too, right now she would be spreading rumors how the Crimson Knights caused these monster appearances, and are endangering the physical well-being of all players of this game just because they couldn't leave a single human being alone. But she is too nice for that. And a little gullible, but that comes from "too nice" too.
Actually, turns out the main guy(?) is just a lot of sociopath, and a little of an asshole. A pebble when compared to the boulders that are the rest. And at least Sora has the excuse that he is, well, roleplaying an asshole.

I really wish at least one of the characters had common sense. Or at least to be genre savvy. They are fucking gamers, how can they be not genre savvy? Sigh. At least Yuki Kajiura is there to sooth my soul. How must I know where obsession needs to go...
Posted by erejnion at 02:24 No comments:

First, the cover, as for some reason I really like Watanabe's design for Tenri:

Then... whoever that Hinoka guy is, I am glad he spent the effort to release this OVA, especially how nobody can even find an .iso, not to mention translate and release it. But... His japanese is obviously on a rather low level, and he didn't bother much to smooth over the English. Instead, the script was really faithful to RHS' scanlation of said chapters. And by "really faithful" I mean, lots of the lines were directly copied from there. It... you know... does not actually work. The OVA changed some stuff, especially at the beginning. To be precise, in the manga Keima first goes to his game library, falls over, then goes shopping; instead, in the OVA, Keima directly goes hunting for new games. That's okay, direction-wise, I actually like it this way more, it's more... concise and to-the-point. But, because of this director's decision, the translation was absolutely off, being simply copied from the manga. Putting this aside, there were several moments, where Hinoka shortened lines in order to make them fit in the time constraints... which changed the meaning. Oh well. I can bitch about the timing and typesetting too, but considering I didn't bother at all to fix them, I am guilty too.

Speaking of guilty... yeah, I am a native bulgarian speaker, I don't live in an english-speaking country for three years already, and I know just a little japanese... So, whatever efforts I spent to correct Hinoka's scripts are, by definition, useless. The best I can hope for is that my script is a little less wrong. But, you know what? Such shit is one of the things you should do at least once in your life. Like... like walking in the rain. No, not the summer rain, that warm thing that cleanses you, just the normal October rain. Heck, the weather is going to hell anyway, so I am not even sure what "normal October rain" even is. But yeah, at least once in your life you should get soaked to the bones. Just so that you know what the feeling is. And, as an anime fan, you should at least once in your life release (shitty) subs for a favourite show of yours. A tide of life, so to speak.

Ha, all in all, I certainly don't regret the slightest these wasted two hours of my life.
Posted by erejnion at 00:12 1 comment:

Miya, you got it right this time! 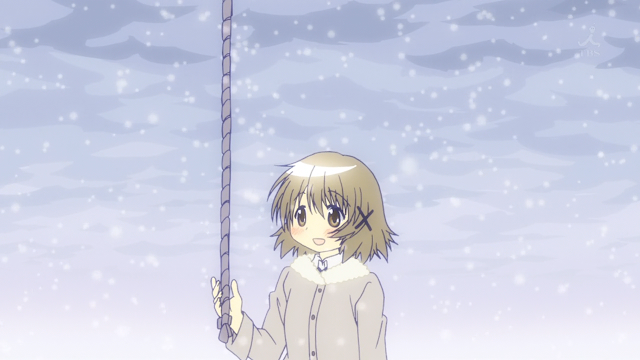 This scene was ... one of the best ever. I cannot rationally say why I loved it so much, but...

...yeah, it's around the level of that train-passing-by scene from Chuu2, ep6.
Posted by erejnion at 22:56 No comments: