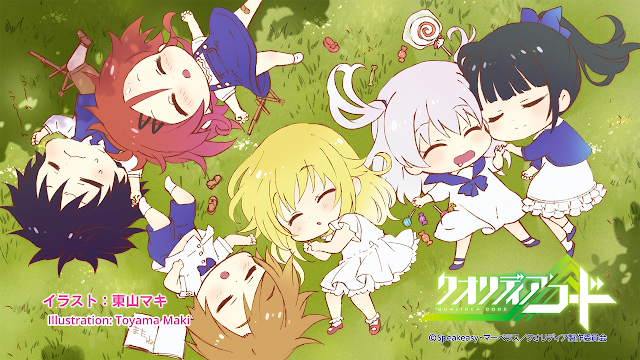 Okay, I've no fucking idea what to make of this. I'll need to rewatch it on the BDs, because right at the moment I'm not sure if it genuinely is really good, or just the blank spaces due to lack of animation are so prevalent that I'm just filling them in my mind in the best way possible.

I'm convinced to think that the authors behind this aren't incapable of doing something good, just they've never yet ~chosen~ to do so.
And yes, even without animation, this series did some amazing characterization and interpersonal relationships, while balancing the "screen"time.

Vice versa, you can't even tell if all these elements are supposed to be tribute, parody or plagiarism. From The Matrix to Saya no Uta, this shit had everything in it.

Not that this is per se bad; not even one of these ideas felt unneeded or not in place.

What's more, the first episodes really went to great extends to do the animation right, to fill in all of this depth that can't really be translated by just script and voice acting.

And the time spent on building the secondary cast was enormously out of proportion for a second-rate anime. Between Kyouka-sama echoing what Genjuurou said and the kinda stupid harem protag with the fancy haircut, I've distinct mental images for every named character in the whole series.

But by all means a first-rate anime shouldn't resort to this enormous amount of tributes/parody/plagiarism.

Whatever. Let's concentrate on the important parts:

Kyouka-sama and her revered kids made this anime for me, no matter all the QUALITY.

Email ThisBlogThis!Share to TwitterShare to FacebookShare to Pinterest
Labels: Qualidea