201407180057 Emanon
The only story I've ever written had a similar feel. You just meet one day something kind of out of the world, then chat with it. Nothing much.
Now, for the second part of the Memories.

tbh... this volume felt like they didn't really know how exactly to extend the mythology, but still tried to. I was okay if they didn't try. I would have been okay if this attempt had matured into something great. But, this "to be continued"? It hurts.

201407181526 GitS
I am thinking too much about the Laughing Man. Was it "Laughing Man"? I don't remember. Up to p125 this feels completely and utterly episodic. I wonder if things will start to chain up, but I doubt it.

201407182010 GitS
Aaand done even with the notes.
Yeah, as expected: it did not live up to the bloated beyond belief expectations.
As good as it was, I don't see how Kusanagi is such a good character. Maybe I will agree more down the line? But hellraiser appreciated mostly the first volume, either way. And in this volume, it was kind of sparce. Two sides, more or less, without as good connection between them as I'd want. Beckie had at least 10 years old kid / mature woman / teacher to her, all separate sides of her personality, switching between these gears. But, then again, Beckie is around my favourite female character ever. So yeah, I wouldn't call Major exemplary. But, maybe I will? I tend to give way too much importance to the time spent, the time that leaves the character mold my perceptions of her, and vice versa: to change what I read in the character.
Ideas-wise, it was perfect. But I enjoy more the playful execution in Memories of Emanon... but that's unfair, as a short story is definitely different from the full-fledged book that is GitS. Not unfair per se... more like, the comparison is pointless.
I...
hm, wonder.
Were there two missed pages? Were the two pages of lesbian sex the "missed" ones? Should I wait until I see them? Should I not? Do I want to read Man-Machine Interface right now, either way? I think I'd give it a rest, and leave this volume settle down some in the back of my head. That's the best possible reaction to this book, I guess.

201407190055 Global Astroliner
TODO: find a better release, might be worth rewatching once

201407190252 Precure
I really fucking can't stand that little shit Cure Fortune. Worst Precure ever... I'd say, but I've seen anything from only 3 seasons up to now.
But, really, lawful good fuckwits like this are vomit-worthy disgusting.

201407190301 Precure
ZAMAAAAAAAA
That's what you get when you build your sense of self around a fucking revenge. Everything goes down to the sewers. You cannot keep up your lawful good ideals without the strength to enforce them, now, can you? You are simply nothing if you are not the strongest one around.
Seriously, this is so satisfying <3

But I could do without Blue in the episode. He was not around for so long I forgot how despicable he is.

<11:08>
Haha, the little chit had indeed given up. I hoped I will not be right, but no, she really has no redeemable traits.

<11:43>
Aino is saying something, and I am sure it's not what I am hearing. And the subtitles spell out something. But all I see is
WITH HARD WORK AND GUTS
...I think I should have myself checked in a hospital about this sensory disorder.

<12:13>
DONT FUCKING APOLOGIZE TO HER. Hime, you are too good to bother yourself with such lowly lifeforms.

<12:36>
Awwww, that was so good <3 that's why Hime's best girl
She just accepted her downfall and moved forward.

<12:48>
Whoa, suddenly redeemable traits. Okay.jpg
That was kind of out of nowhere, but I guess even LG are G.

<13:13>
HHAHAH, got blown up off-screen
I love this episode already

<13:33>
Oh, ffs, I got it already. Cure Fortune Now Sees The Light, out of nowhere, with no character development in between. In other words, your usual "I am your father" moment. Seriously, fuck this, we got what you are doing, now stop it and let us see some ass kicking.

<15:44>
Well, that fucking made sense.
No, sneering aside, that was a nice moment. Exactly the right amount of foreshadowing. Quite well for a turning point. I like.

<20:00>
Yep, she is only spouting the usual lines of the spin of the LG archetype that I kind of stand.

<00:50>
Whoa, that's overpowered. And here I thought that's a mere communications channel that's opened. But noo, she can nuke without leaving her chair.
k.

<04:44>
ATTA BOY
THAT'S HOW IT'S DONE, BOYA!
FUCKING DODGE THAT QUESTION! FUCK ANSWERING! FUCK GIVING NECESSARY INFORMATION! FUCK EVERYTHING! WE GOTTA HIDE OUR ASSES!
Pf. An entirely different kind of disgusting.
Also I didn't like how Mirage acknowledged that ship. I hope we do get Blue x Mirage in the end, that's the only way out I see for now. Aino deserves much better.

<07:51>
Hey, fucking KY, stop saying this name. Even I am getting embarassed. 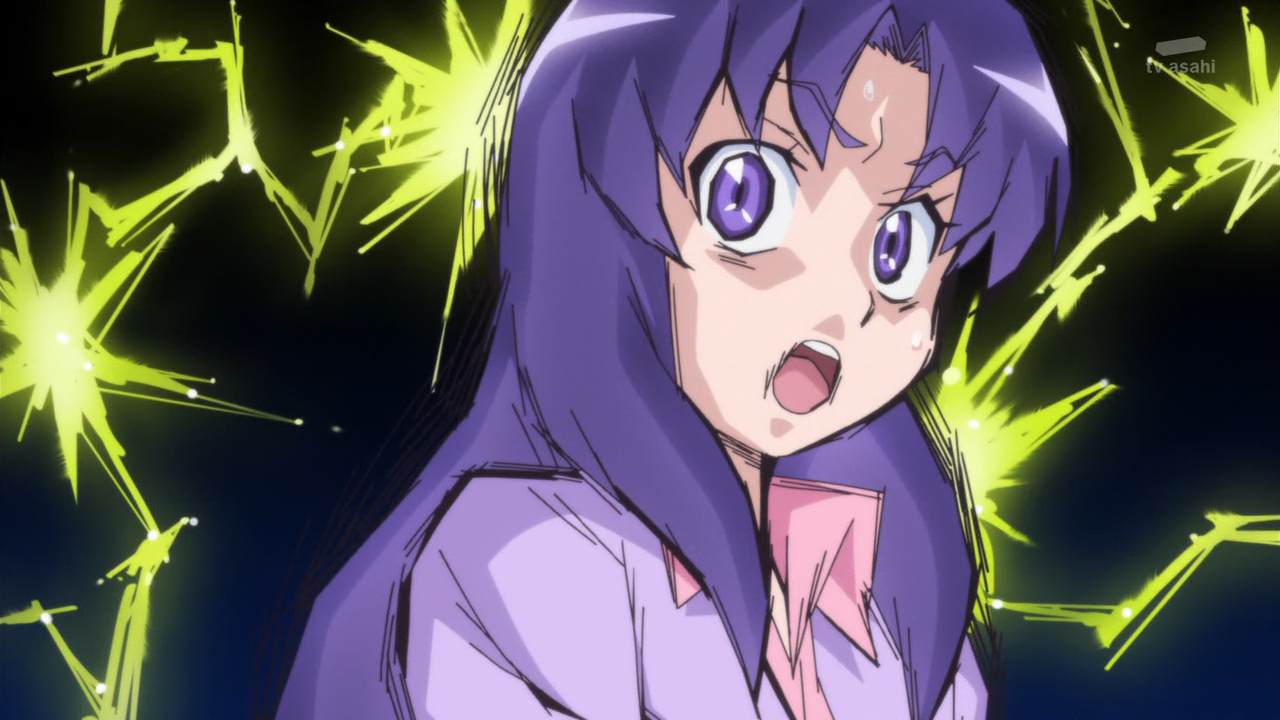 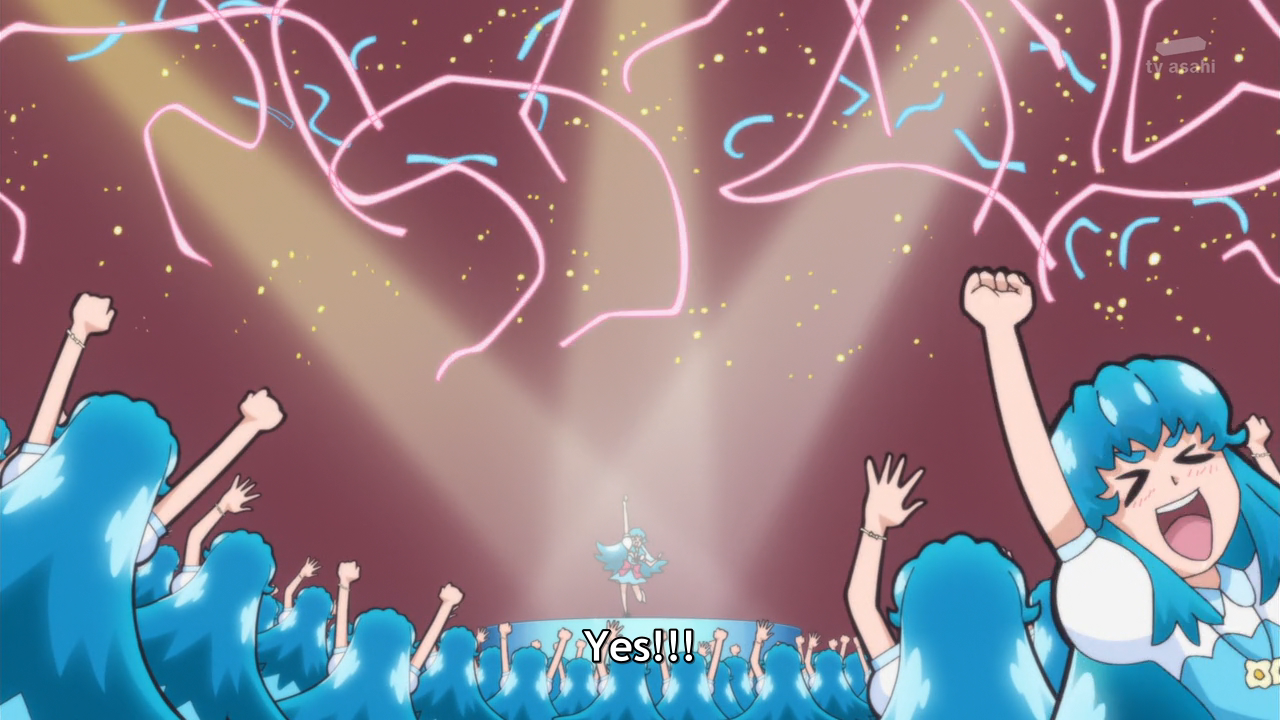 All dem Himes
I am in my heaven <3

<13:32>
>that feel when we knew this for 20 something episodes already
>that feel when it doesn't feel that satisfying to hear it from her mouth directly
It's more of an "ima sara..." 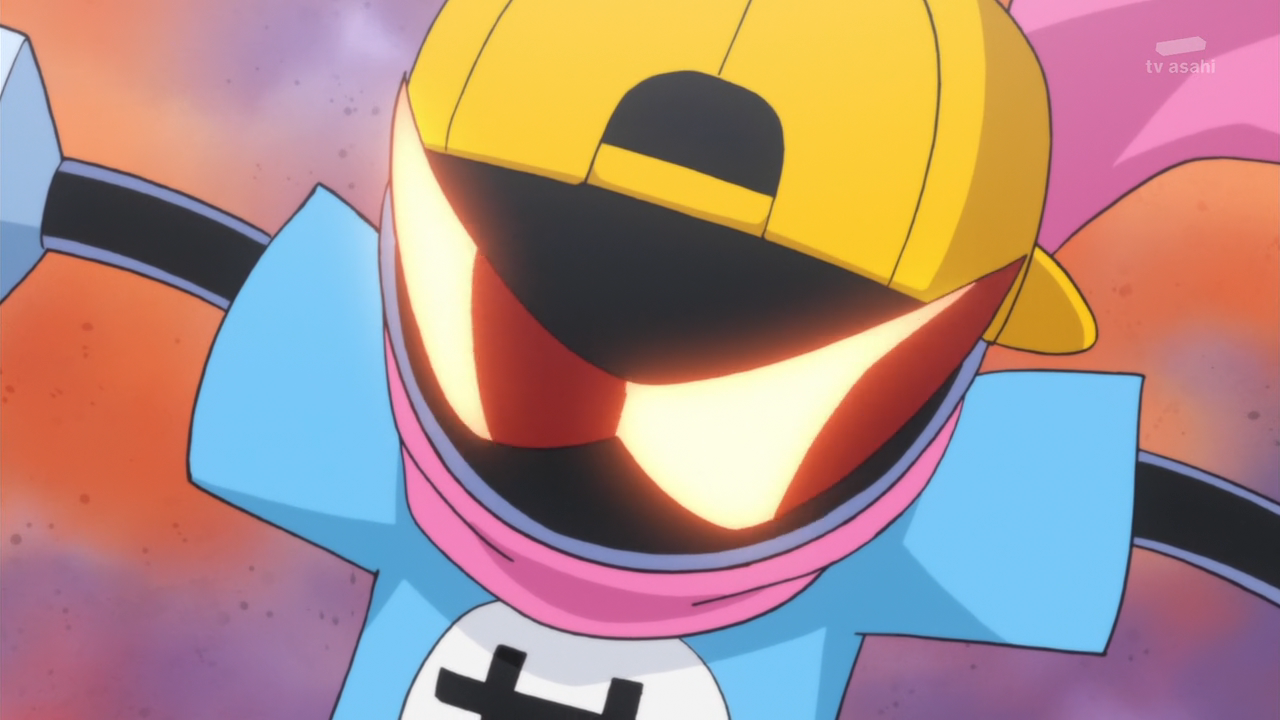 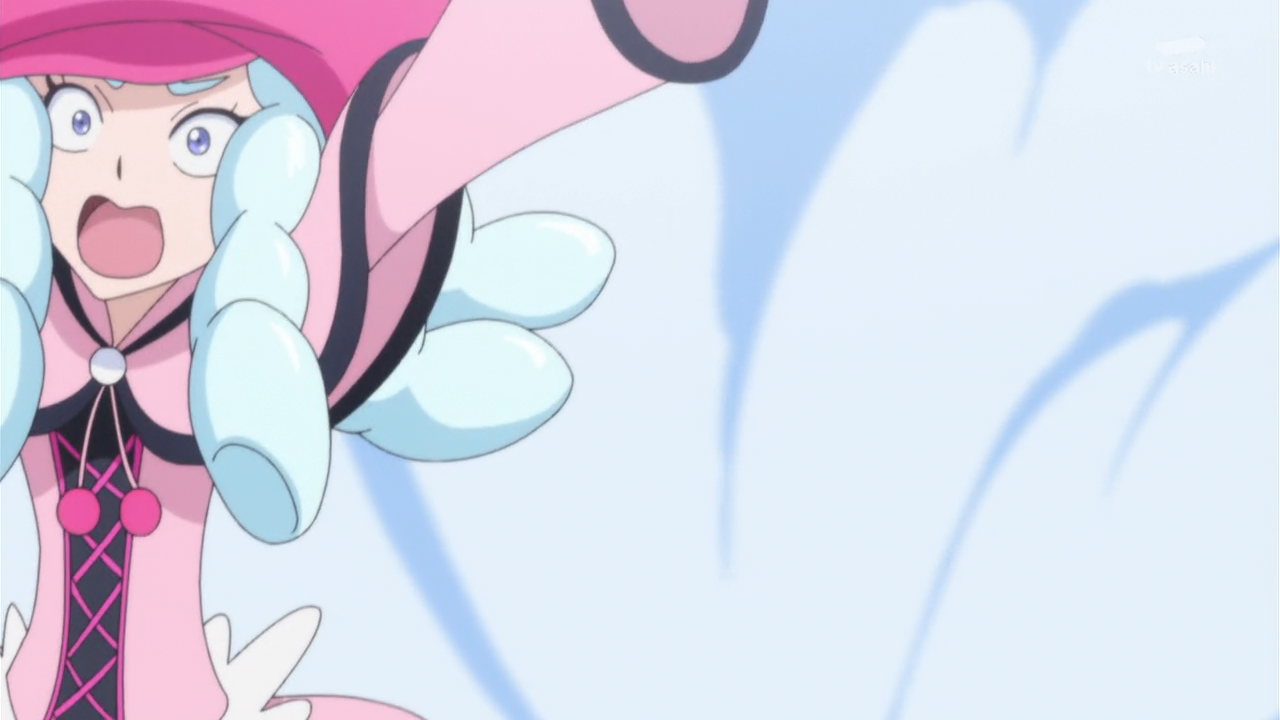 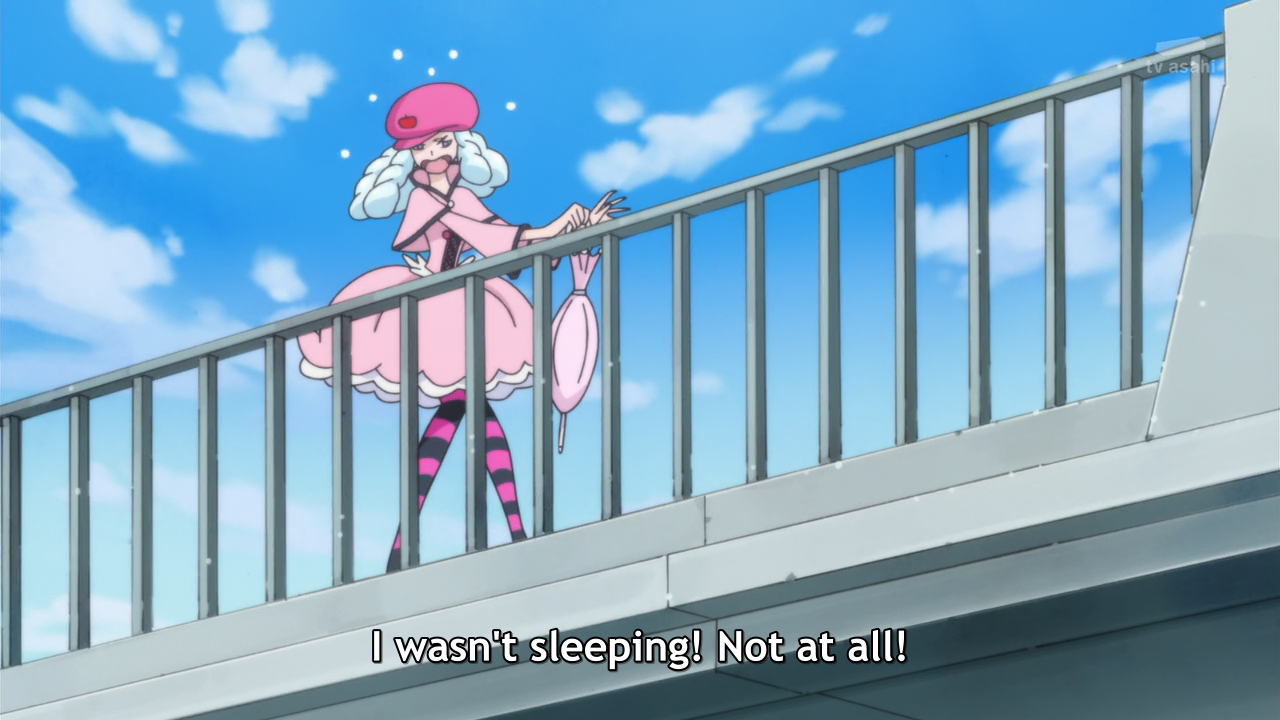 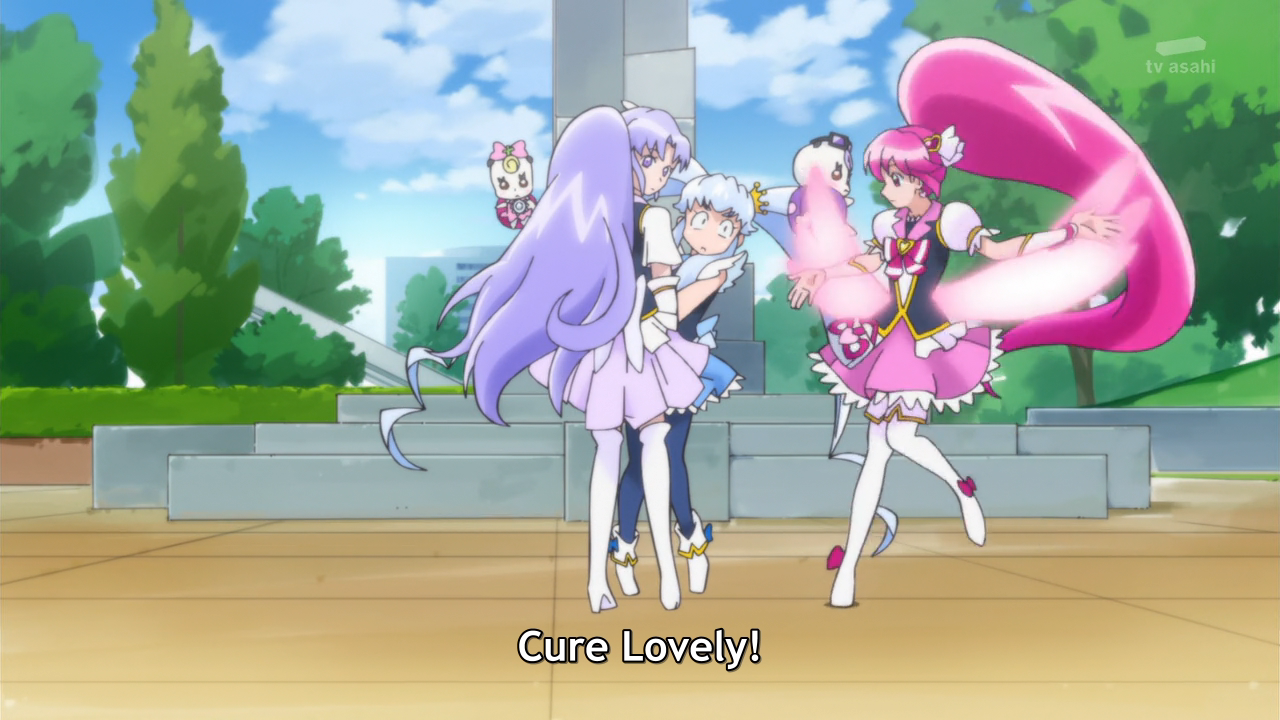 <21:22>
time for hot lesbian sex, then?
...wait, while I was writing this, LEOPARD? WTF? Business as usual, the cards make no fucking sense, but this time the TIMING made no sense either.

<23:49>
ugh
this doesn't bode well
I will try to delete this scene from my mind and sleep peacefully thinking the next episode will have nothing to do with Blue.

201407200148 Affair of Nolandia
I did not believe the people.
Turns out they were right.
The start was indeed pretty bad. I kind of get what they wanted to do, but still? The designs were pretty much the worst I've seen in this franchise up to now, too...
But.
Then the last quarter happened, and it suddenly plunged into 10/10 territory again. I can even pinpoint the right moment!
"We will always be Samara's men!"

As a conclusion, I would say this was the funniest Dirty Pair episode up to now and the funniest chase scene I've ever seen. 8/10

P.S. I am not sure where I laughed more, the Hayate part or the Samara smiling blankly while everything around her is destroyed. 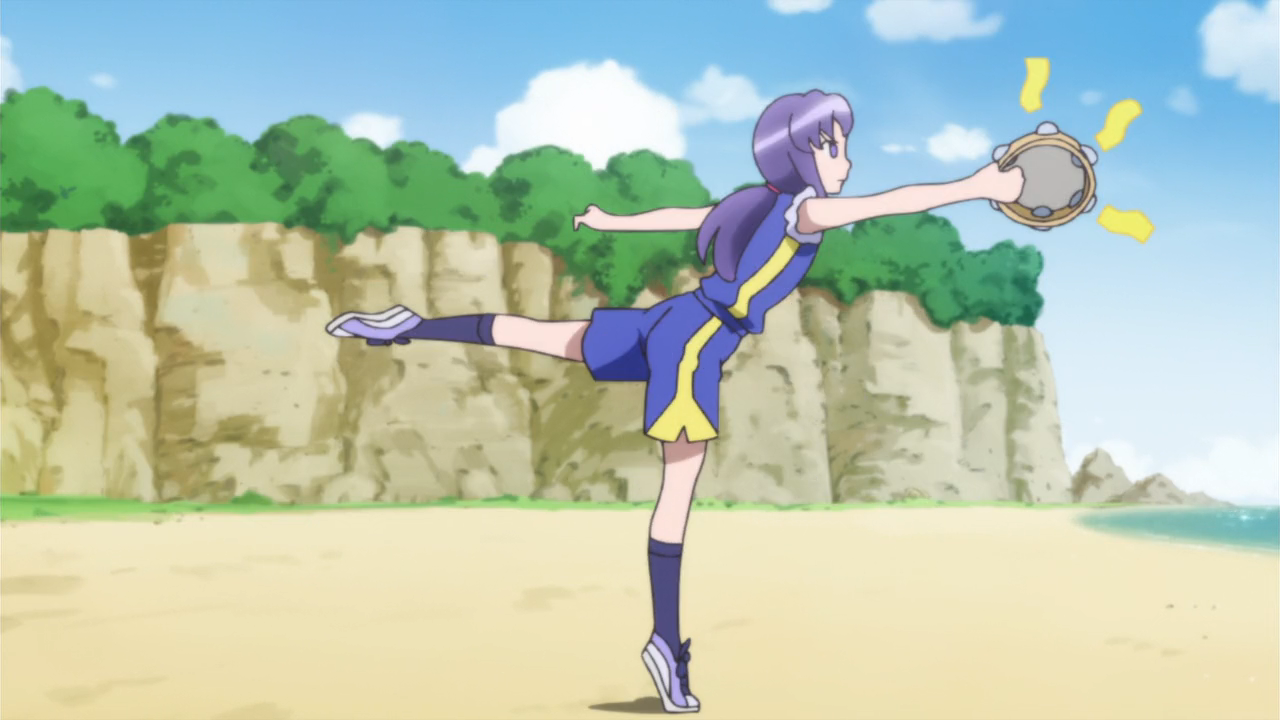 P.S. Plastic Little's manga was good.
P.P.S. Kaede is so OP <3
P.P.P.S. I mean, seriously? Whole episode of no fucking animation whatsoever, then beautiful fluid as fuck pure 30 frames per second scene of... a kiss. That's why I love Shaft.
P.iunno.S. Somebody should steal Shaft's budget and force them work within the same limitations as ten years ago. Oh, but that after they make Hana. Kizu should either be 8 years of hand drawn animation or a true '05 Shaft masterpiece, but Hana is something for current Shaft to tackle.

201407210026 Gandahar
Was nice, even if pretty badly animated... speaking about that
>animated in Korea
eh, ok.
>animated in BEST Korea
WAIT WHAT

201407212314 Sukeban Deka
Seriously, fuck my life. Only two episodes worth adapted from this masterpiece? Nearly two hours of victorious laughter, epic female protagonists and male side characters who take down hellies with one shot from a revolver, constant overshaded shots of epicness, and, of course, yo-yo action. Uh, okay, this may sound bad, but it was awesome, believe me.
Either way, you can clearly see it's written by the same mangaka who did the best Monte Cristo-inspired story ever: Arisa of the Silver Hair.
I can't recommend this more.

201407220130 Lemon Angel
Hmm... dunno, didn't like these last episodes as much as the previous. Maybe I'd've liked them better if I did understand the songs? I doubt it.

201407221247
Okay, this dream was pretty fucked up.
I dreamt that Sanzenin Nagi has an older brother who had made her indestructible, and that Hamster was a 4channer (at least so said the subtitles (yes, there were subtitles (only in that one scene (most of the dream was ... in japanese? iunno) ) ) ).
...
The rest was mostly shipping, so I will skip describing it. Especially Hayate's comments on how Hamster's breast feels.
Still, I didn't know my subconscious had such a good grasp of the characters and the compositional structure of Hayate. It felt utterly Hayate-ish, complete with some crepes and one of the male side characters, on the next street to where the action was happening... no, I don't remember who that side character was, come on. It was a dream, I am amazed I remember that much already.
(I wonder if the zeppelin part was influenced by xkcd)

201407221547 Horizon
I'd forgotten how good this series is.
S3 when? ;_;
I should download the full ZONE//ALONE when I go back to good internet. I think this Minorin performance grew up on me considerably with the years.

201407230110 Rokujouma no Shinryakusha
So, the second episode was actually pretty good. I am happy. Based Oonuma Shin, good opening/ending themes, sweet dynamics between the characters, evil laughter... wait, why am I writing this here? I've got net now! I better post this soon.
Posted by erejnion at 01:27

Email ThisBlogThis!Share to TwitterShare to FacebookShare to Pinterest
Labels: Ghost in the Shell, Kenji Tsuruta, RMJVC, Rokujouma no Shinryakusha, tl;dr