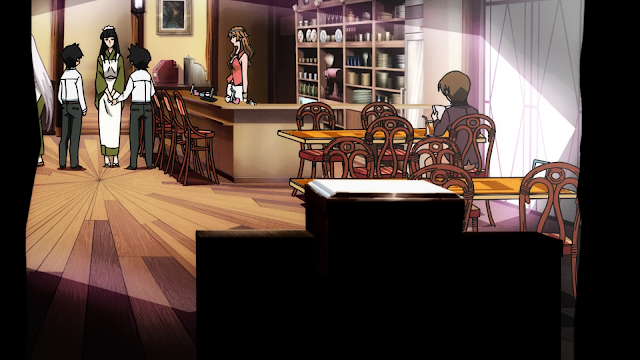 That's something people are touching upon when they say "light novels are just anime scripts in book form."

Anyway, that's why you get such a short list now.

The Perverted Prince and the Cat Without a Smile

Both the manga and the anime adapt the first five novels - one with good pacing, the other not so much. I loved both of the adaptations. Nevertheless, I do not recommend skipping the novels at all - they hold their own value beyond what they describe. The quality of the language shines through even in the fan translations we have. From there on, however... the author only got better. The remaining novels blew away my already sky-high expectations and put the series in my eternal top list of world fiction. But, what's more, the structure of the story is something the author could never get away in a serialized medium like manga or anime.

I think that's why we never got adaptations of the rest of the story.

Yes, the narrator fibbing Mia works equally well in the manga, and will eventually be a sight to behold in anime form. But her pure smugness is hard to translate in any adaptation. And certainly, her path of glory will be even harder. We've hardly seen it for now in the manga, I'm crossing fingers the mangaka manages it. The books just contain a charm that works best exactly in prose.

Also, I bet they won't even have Path of Glory as the ending theme for the anime. Such a disappointment.

As opposed to the previous two titles, these two don't have anything too specific in terms of style that stops them from being adapted. Rather, what stops them from being adapted well is that the authors are too good at interweaving many concurrent plot threads, always keeping as much as possible in movement. That's why both anime adaptations had a very similar fate: heavy rewrites with the help of the authors, directed towards simplifying the plot and cutting out the heavy foreshadowing and plot hooks so omnipresent in the novels themselves.

I mean, I love both adaptations, but I don't see second seasons ever coming. Not unless somebody decides to adapt Imouto Sae in full from start to end, so they just redo the first season too.

I love nisioisin, by gods, I do. But I don't think there is any specific value to his books being prose specifically. He has proven equally capable in doing manga, for example. And an anime original project by him would also be absolutely great. Part of this, of course, is that he struck gold with Shaft, with his style meshing so well with Shaft's strengths. But yeah. I don't actually own any of his books.

With Haruhi the situation is similar, though I do have the books there. Both The Disappearance and The Intuition are some of my favourite books. Please do read him, S2 never I want Hirano back ;_;

I feel like the correct way to experience Otherside Picnic is to read it from a web1.0 page, maybe geocities one, chapter by chapter. My dream in life is still to get some Eastern European director, heavily influences by Tarkovsky, to do a live action adaptation.

Natsume Akatsuki is fun, but really bad in character development.

I don't really feel like contemplating the remaining unmentioned LN authors that I've read in my life. That's... I guess all you need to know about my opinion of them.