*UQ Holder - I fucking hate them. They know I'll swallow any anime even remotely connected with Negima, but did they have to make it so shitty? Adapting UQ Holder is so fucking easy, but they manage to completely fuck it up. It's just not fucking fair.
WUG - hahahhahahno.
Osomatsu - I still have to finish the previous season. Somehow it couldn't manage to make me watch it every week, even if it was good.

*Mahoujin Guru Guru -  Started during Summer. It takes some time to get used to the characters and the humor to pick up, but when the groove kicks in, it's one of the most enjoyable series out there. This buildup took around 7 episodes for me; and, by the way, as a comparison, the old Guru Guru adaptation is said to have needed ~30 episodes to reach the same moment plot-wise as these seven episodes.
Black Clover - that's the most awful battle shonen I've seen in a while. There won't be any decent fantasy in it. Couldn't I get my Mx0? Was this too much to ask? It's just not fucking fair.
Sengoku Night Blood - I didn't perceive it as such from the start, but... that really is Twilight, isn't it. Huge cast that I couldn't care less about, either way.
Juuni Taisen - It's shit. But every time I decide to drop it, nisioisin includes a scene that I take a liking to, and then I want to see more of it. It's just not fucking fair.
Evil or Live - chinkshit
Osake wa Fuufu ni Natte Kara - I expected Danna, and it was nothing like Danna. It was actually rather shit. There's no point in watching it, even if it's not as disappointing as it was for me if you curb your expectations.

Konohana Kitan - there was a yuri manga... that got rebooted... in a non-yuri magazine... and the reboot is now getting adapted... think about it... yep. You reached the same conclusion as me, didn't you? This is gonna be just a shameless yuribait all along.
Urahara - it's not as bad as some others, but production-wise it's a mess, and the story and characters are just not worth suffering through the bad storytelling techniques.
Shobitch - really cliche and bland in its execution, which is weird for such a premise.

*Just Because - The author of Sakurasou seems to have grown a lot since that novel, because this is actually quite the decent teen drama, with realistic characters, with realistic interactions, and which doubles as a reasonable slice of life, as any good teen drama should. But while the first four episodes had top notch animation that added a lot to the way the story was perceived, rumors are of production troubles down the line. And indeed, the fifth episode was already way worse. Most probably the eight episode is gonna be just a slideshow, Qualidea-style. It's just not fucking fair.
Ousama Game - not touching this
Inuyashiki - "Look at how gritty we are, and how different from everybody else, we even have an old man as a protagonist! What is that, the old man reacts like every other stupid teenager protagonist? Age is not just character design and backstory? Come on, the author can't write anything else but that, cut him some slack."

*Shoujo Shuumatsu Ryokou - At the moment I'm really fucking suspicious. This anime is way too good, I'll probably get tired of it fast or something. No matter that it's doing every fucking single thing in exactly the correct way, no matter that tsukumizu has drawn the ending completely by herself and obviously has lots of creative control over the anime, and no matter that obviously tsukumizu is a faggot almost 1:1 with myself.
Kino no Tabi - I'll watch it with hellraiser and eien ryuu after it finishes, begrudgingly.
Robomasters - It's a normal cliched sports shonen, but with robots (not super robots, normal present-day robots), and chinks. tl;dr: it's shit.
*Net-juu no Susume - I actually really like the opening. And it's a nice josei adaptation, with some nice representation of mmorpging. Except, you know, you have to swallow that japs are shit human beings who spend tons of money on lootboxes.
*Garo - It's nowhere near the level of the first Garo anime, but it's quite enjoyable in its own right. The introductory buildup is still ongoing, so I'm not sure what the story is going to be. But Sword doesn't seem to have much place for growing, he's pretty perfect already. Same for Sex Hair Motoko... which leaves the kind of shit girl voiced by Hwaito (not simply KugiRie, she obviously uses her exact Hwaito voice, again in NY) to be the main plot drive. That's kind of worrying, but oh well.
*Taishou Chicchai-san - I don't get it. Are they trying to say that Imperial Japan is bad? Why are they chibis? Why am I watching a fujoshi anime? Mysteries of the universe.

*Code: Realize - What's this? A reverse harem where EVERYBODY IS A PERFECT GENTLEMAN? No near-rape scenes? Nobody behaving like a beast? Main girl doesn't get violated constantly? Not even by the "rival" character who gets off on the bad note with her? Since when have I fallen into this alternative timeline where women don't schlick only to depraved shit? It's a nice steampunk anime, anyway.
*Sangatsu no Lion - The second season seems to be even better than the first one. I don't need to say more.
Two Car - It's a sports anime. Not a good one, at that.
Blend S - It's really bland, and everybody in the cast is the "earnest doofus". Only variety comes from the main character, who is the "INNOCENT earnest doofus", and the new character, who is also the Author Avatar. Why am I still watching it?
*Hoozuki no Reitetsu - See the note for Sangatsu.
*Mahoutsukai no Yome - It's a great adaptation. And the ending is 10/10. Frankly, you should have read the manga already; and while the manga is just too good to be able to be fully translated to anime well, they are doing an amazing job at it.
*Kekkai Sensen &Beyond - See half the note for Sangatsu. Hwaito's absence sure is felt, but the anime is managing a much more faithful adaptation of the manga like that, which is really good in its own way. Hwaito gave structure to the first season, but the seeping chaos of the manga in the second season is great too. I just hope we see Hwaito again, for the season finale or something.

Animegataris - Kind of cringey. Don't see much of a reason to watch it.
*Imouto Sae Ireba Ii - It's from Haganai's author. And this guy sure understands his audience. The Gundam x Eva masterpiece wasn't a fluke. This understanding makes for quite the enjoyable series, and that's even without mentioning the great opening and the BEST GIRL EVER SERIOUSLY JUST WATCH IT SHE ALONE MAKES EVERYTHING WORTH IT TEN TIMES OVER COME ON
Kujira no Kora wa Sajou ni Utau - Let's just copy my complains for the second episode from fufufu:


I think I started figuring out my dislike for the mud whales anime. It's a little theoretical.
As I see it, fantasy can be done in several different ways. One is like LotR, telling a fairly straightforward story with lots of similarities to a mythology and fairy tales. The other is the more science-fiction-y way, which borders on a case study of exploration how a fantasy society would behave, and is often heavy on politics, science and sociology. Stuff like Vlad Taltos falls here (Song of Fire and Ice is more of a torture porn fapfic than actual fantasy series). The third foregoes any science and decides to talk about emotions. At that point you can no longer have a magical system, because that's detrimental to talking about emotions. I actually don't really like Ursula Le Guin, because I consider her bordering on this.
And the mud whales anime is like the worst example of the third group I've ever seen. I doubt we'll get any explanation why any of this is happening, or how their society functions, or how any other society on this planet functions…. we'll just see tidbits about their daily life without getting a more systematic picture of anything. Because, after all, the point will be empty philosophy about having emotions and so on.
We could at least get some ADVENTURE with a small cast going around different places, but for some reason I don't think it's gonna happen. Well, I may skim through the third episode too, anyway.
To blatantly plagiarize Grey, many things are normal, not just "having emotions". Humanity was quite accustomed to having cholera, but does that mean having cholera is okay? Fuck this logic. Fuck it to hell. And why the fuck is he still calling her Lykos? Just why… 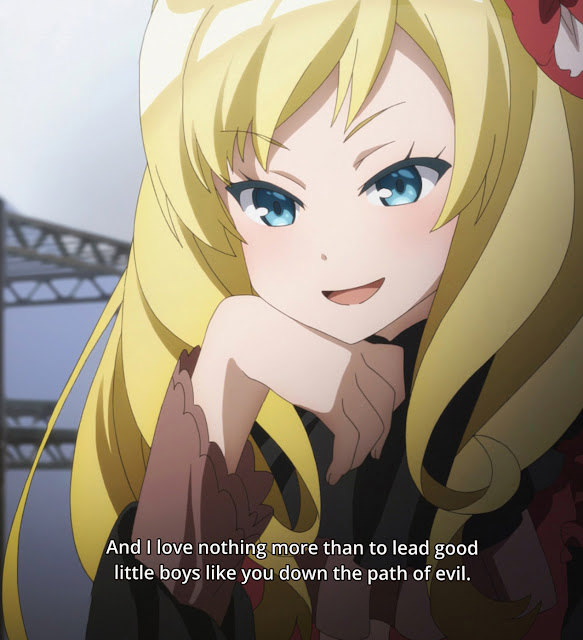